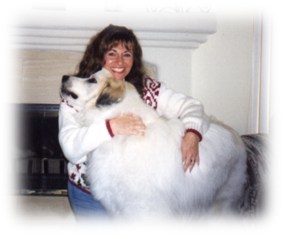 Ann called me in to talk to her two year old female dog, a Great Pyrinee named Shadow. Shadow didn’t enjoy going to visit different people or places anymore. When they did go out for a visit, she would start whining and pawing at her “Mom” right away and Ann would be forced to leave, cutting the visit short. Ann couldn’t find a good reason for this behavior so she asked me to talk to Shadow to see what I could discover.

As soon as Shadow started our communication, she complained that her four knees were hurting, but mostly her right hind leg and her hip. She couldn’t understand why she wasn’t able to play rough with other dogs anymore. Cold weather aggravated the pain and she felt uncomfortable whenever she was away from home. Ann explained to me that Shadow had had an operation on her LEFT knee when she was barely a year old. I suggested to Ann that she should take Shadow to her veterinarian for a more thorough examination, but that I had the feeling it would be the RIGHT knee which would require x-rays. We talked about a lot of other issues that were real concerns to both of them and the evening ended with positive feedback.

The next day, Ann took Shadow to a leash-free park where dogs can mingle with each other in a fenced yard under the watchful eye of their owners. Shadow really likes it there because she can play around with other friends. While playing, Ann heard Shadow let out a cry in a piercing voice that made her jump with fear. Shadow’s right hind knee was hanging in mid-air. No longer able to put the weight of her huge body on her leg, Shadow was taken directly to the vet who suggested knee surgery immediately. I went back to visit Shadow three days after her surgery. She looked miserable but she understood, through picture telepathy, that this was only temporary pain and from now on she would be a normal “kid,” able to jump and play without any more pain. I was able to teach Ann how to visualize and utilize healing techniques for Shadow’s benefit. She got great results. Her vet told her Shadow had recuperated much faster than she had from her previous surgery. The stitches came out early, and Shadow is once again running free in “Bark Park,” California.