I just wanted to thank you again and tell you how wonderful it was to see you and how terrific you really are. When I got home yesterday I spent most of the day observing Jack and his routine to see if I could validate what you had said. 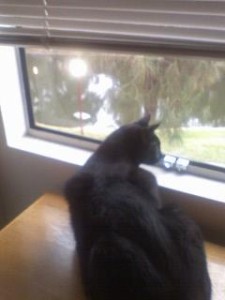 EVERYTHING was spot on.  First it was weird but Jack walked around and to the other kitties he acted as if he had, well, the best way of describing it was that he had a big secret. Then he laid next to me and gave me a whole lot of attention; then when I noticed he wasn’t laying next to me I went and found him he was in the pirate room laying on the ab lounger. I’m sure he found the temperature of the room to his liking. Then later on Jack was in the bay window looking at the ducks and I looked out with him and there was an egret out there too. He quickly turned his head to me as if to say “what the heck is that thing” then to top of the evening Petey whose picture I have enclosed was running around as if she had a fire on her tail and Jack was chasing her and then he let her tackle him.

So I hope you find these first validations bring you pleasure as much as knowing that Jacks’ duty taken over from Buckwheat; that he is my number one Mister and that he makes me so incredibly happy. 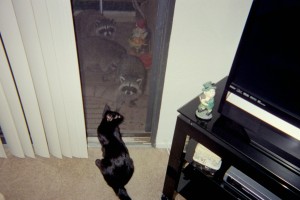 Click to view a larger image of Jack Sparrow and the racoons.