Sneakers cozy in her favorite spot.

Sneakers, now on her favorite spot

Hi Monica,
I just wanted to give you an update on two of my cats for whom you did consultations shortly after Christmas. Sneakers, my lovely long haired tabby was being attacked for years by all of the other cats in the house, and we had no idea why. You told me you sensed that she was giving off an odor that the other cats didn’t recognize, and they didn’t even accept her as a cat. You also mentioned that she smelled the same way a diabetic person does, and that she may have an underlying health condition which could need attention. We haven’t taken her to the vet yet as all of our funds have gone towards George, who I will fill you in on next, but we did follow your suggestion of trying to mask the scent with another. I went to a health food store and picked up some lavender oil. I confirmed with the store that it was safe for pets providing it was diluted with water. I put about 15 drops in a spray bottle of water and spritzed a towel and then rubbed her down with it. It was the most amazing thing! From that moment on, she has never been attacked by a single cat in our house. It was so stressful before. The attacks had been daily and repetitive, so we are all thrilled with the results. The other thing you mentioned was that Sneakers had indicated that she liked high places, and hoped we could create a place for her that was high up and safe from the other cats. The same day I spoke with you, I made a soft bed on top of one of our china hutches in the living room. It’s very tall, and we have to help her up there a few times a day, but she loves it! Only a moment after I put her up there for the very first time, she curled up and went to sleep as if it had always been her favorite spot. I’m sending along two pictures I took a few minutes after I put her up there, which was about half an hour after I spoke with you. I’m not sure if it’s the combination of both the high up space that is all her own and the new lavender scent (which we no longer have to use), but she now rules the roost.

On a daily basis she gives chase to every cat in the house, but in a playful way. They aren’t exactly sure what to make of her new actions, but some of them are starting to play with her a bit and it’s wonderful. 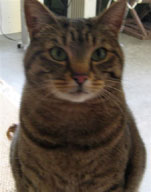 Thank you!! I also wanted to let you know about our Georgie. He’s our short haired tabby cat who was struggling to get air through his nose. Before calling you for the consultation, I’d taken him to numerous vets and no one had been able to help him or determine what was the cause of this mysterious problem. You told me that he was indeed having trouble breathing and that he sometimes would wake up in the middle of the night worried that he couldn’t get enough air. You also told me that you could sense that he had a tremendous headache along with the breathing problem, kind of like a sinus headache. You thought that it might be a tumor, but whatever it was it would take some real investigating by veterinarians to get to the bottom of it. This has proved to be true, the investigating part! After we spoke on the phone, I booked an appointment with a clinic three hours away, one of only two in the entire province that had CAT scanning equipment. This hospital performed a CAT scan of his head, and of his entire body, while he was under anesthesia, and also did a rhinoscopy where they put a small tube with a camera through his nasal passages. They also did a biopsy of the nasal tissue and sent it off to a lab for analysis. The CAT scan results were studied by a physician at Colorado State University. I was so devastated when they called me a few weeks later to tell me that they still had no idea what was wrong with him. Of course I didn’t want the news to come back with anything negative, but after spending a thousand dollars at their hospital, I was hoping they could offer something. All the vet could do was prescribe anti-inflammatory drops which we administer everyday to George. He hates it but it helps a bit. Without them he’s in terrible shape. Another thing you mentioned in our conversation was that I should find a diet with no preservatives for him. I’ve tried three different diets, but so far nothing has helped. One of them uses Vitamin E as the preservative and it is a grain free dry food. I thought maybe he might be allergic to grains. Didn’t seem to help him though. I’m thinking of switching him to a vegetarian diet or maybe a raw food diet but what I think I’m going to do first is have the vet take a blood sample and send it off to a lab in California called Veterinary Allergy Reference Laboratory. They might be able to tell me exactly what he is allergic to, if he’s allergic to anything at all. I hope to be able to find help for him soon and will send you a quick email if I’m able to get him healed. Instead of my “Curious George,” he’s my “Mysterious George.”

Thank you again for the consultations on my cats. I look at them in such a different way now and I also try to explain things to them hoping they’ll understand. We are moving to a nicer climate in a few months and into a house that we can all live together in so no cats have to be in a barn or a garage. They seem to be listening when I tell them things are about to get a lot better for all of us. It’s really neat to be able to communicate with them. Sometimes I try to send them images that I’m thinking about but I’m not sure I’m doing it right so I end up speaking out loud to them. Seems to be working!

Thanks so much,
Lana (writing from British Columbia, Canada)