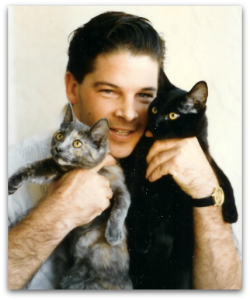 I reached out to you during a very difficult time in my life as I just lost my companion Sebastian. The loss of Sebastian was unexpected due to cancer and I had a hard time dealing with it. I went to the bookstore to seek answers on how to deal with this and I ran across your books. You did a personal visit with me in 2003 (the year I lost Sebastian) and gave me all the answers I knew as well as the answers I did not know. I began to heal and deal with his passing.

In 2006 I lost Penelope, Sebastian’s sister who was 18 years old and going through many challenges in life including diabetes. Even though I had to make the decision to let her go for her dignity and to put my selfishness aside I reached out to you again to help me.

I adopted 4 kittens about 30 days after Penelope left me. One of the kittens I named after me (Bruno) because he/we bonded immediately. In 2010 at only 3 years old I lost him to cancer and was devastated. I called upon you one more time, to do a reading over the phone and was told that Bruno had been with me before and was a part of Sebastian who came back due to our bond. During the reading I was told that Bruno had died TWICE and this was not disclosed to me by the Vet via our phone conversation after his passing that day. After reading the report from the Vet of events during and after surgery several weeks after the reading we had, it was disclosed that he DID DIE TWICE and they tried to revive him.

In all instances with my three companions it was important to be able to communicate with all of them one more time and I thank you, Dr. Monica for the opportunity to be able to move on with my life and look forward to the next level of existence with them.